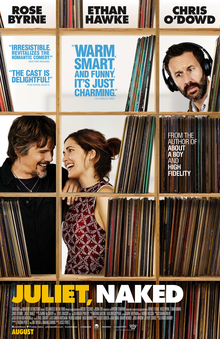 It’s an irresistible premise: an increasingly intimate intercontinental relationship between a superfan’s idol and his own girlfriend. It’s a Platonic cuckolding. Juliet, Naked is based on a Nick Hornby novel that funnels a lot of Hornby’s fanboy impulses — including his self-loathing, paranoid ones — into a single breezy vehicle. Duncan, his dark alter ego, is insufferable bordering on pitiful. When an acquaintance looks at a photo of the young Crowe and pronounces him “gorgeous,” Duncan says, “Thank you,” beaming. Of Crowe’s critics, including Annie, he says, “Everyone’s entitled to their opinion, however un-nuanced” — a line I should use more often when people disagree with me. He does not know as yet that Crowe’s opinion is similarly un-nuanced.