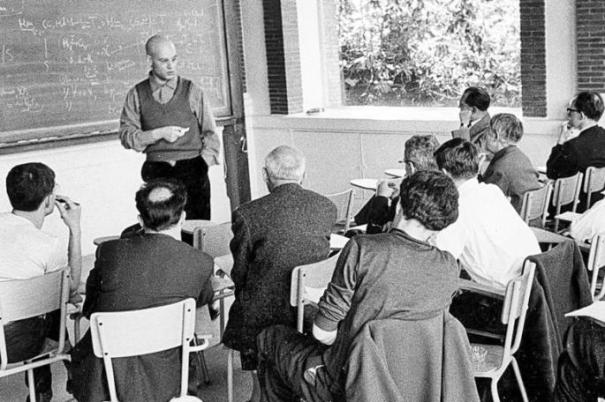 In an obituary David Mumford and John Tate wrote:

“Although mathematics became more and more abstract and general throughout the 20th century, it was Alexander Grothendieck who was the greatest master of this trend. His unique skill was to eliminate all unnecessary hypotheses and burrow into an area so deeply that its inner patterns on the most abstract level revealed themselves–and then, like a magician, show how the solution of old problems fell out in straightforward ways now that their real nature had been revealed.”

The name of Grothendieck, a mathematician who died recently at the age of 86, is not very well-known or is completely unknown to the public. We are talking here about an extraordinary person who made a mark on the culture of his time – a lone genius who opened new unimagined paths in mathematics, not only one of the greatest scientists of the twentieth century, but also a libertarian spirit, a rebel, a nonconformist who brutally broke all ties with the mathematical community in 1970 at the height of his fame just like Rimbaud suddenly abandoned writing poetry. Rimbaud turned away from his muse and chose personal advancement over his art by getting into the coffee and gun trade; Grothendieck withdrew from society to live in solitude in a small village in the Pyrenees, not to escape from himself but to find himself in an insatiable spiritual quest that is documented in Crops and Seeds.