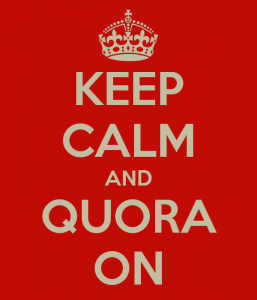 The best feeling a writer gets is when he is read. For us bloggers, a big satisfaction is when we feel people want to read what we publish. Recently, we had a discussion about how to bring more people to our platform. I found a 2011 article on Quora. A good read to understand what works for collaborative content platforms.

On January 20 this year, Google announced that Larry Page would be replacing Eric Schmidt as CEO. It was the week’s big tech story, possibly one of the biggest of the year, and it needed explanation. Within the hour, a user had put the question to the information-sharing website Quora: “What are some possible reasons that Google replaced Eric Schmidt with Larry Page as CEO?”

Minutes later, a former Google employee posted a detailed answer that included: “This has been a long time coming and not really that big a leap to make if you’ve been on the inside… This is a matter of pride and legacy for him [Page], so he’s going to keep Google’s long-term interests in mind in a way that few outside CEOs would be able to do; he’s emotionally invested in a way that only he and Sergey [Brin] can be.”