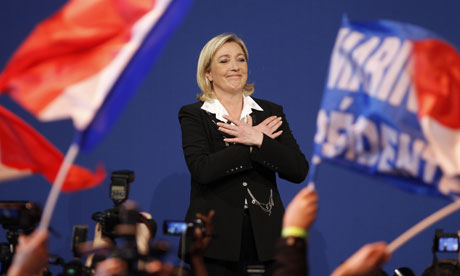 With French elections round the corner, Marine Le Pen has become one of the most talked about politicians. This longread looks at how she has played the media to her advantage.

All politics is storytelling, and all responsible political journalism attempts to account for this, or at least make it plain. Le Pen and her party have long sought to tell a story about the media themselves. This places the journalist in the difficult position of being at once subject and object: they can no longer perform their duties from behind the comfortable myth of neutrality; they are called to speak about themselves, account for their work. And if they are honest, they will be obliged to acknowledge the possibility of contradictions and flaws. Le Pen has intuited this weakness, and understands how to exploit it. If she cannot have what she wants from the media, then, she knows she can at least have her way with it.

4 thoughts on “How Marine Le Pen played the media”