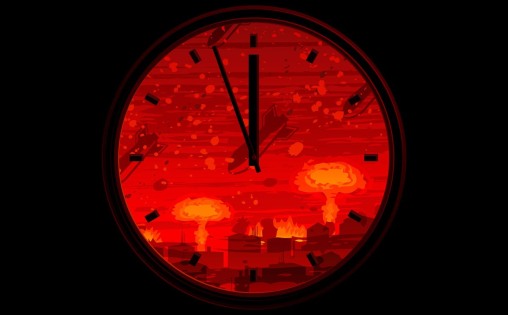 As per Wikipedia – The Doomsday Clock is a symbolic clock face that represents a countdown to possible global catastrophe. It has been maintained since 1947 by the members of The Bulletin of the Atomic Scientists‘ Science and Security Board,[1] who are in turn advised by the Governing Board and the Board of Sponsors, including 18 Nobel Laureates. The closer they set the Clock to midnight, the more vulnerable the scientists believe the world is to global disaster.

Tim Chang, a forty-four-year-old managing director at Mayfield Fund, a venture-capital firm, told me, “There’s a bunch of us in the Valley. We meet up and have these financial-hacking dinners and talk about backup plans people are doing. It runs the gamut from a lot of people stocking up on Bitcoin and cryptocurrency, to figuring out how to get second passports if they need it, to having vacation homes in other countries that could be escape havens.” He said, “I’ll be candid: I’m stockpiling now on real estate to generate passive income but also to have havens to go to.” He and his wife, who is in technology, keep a set of bags packed for themselves and their four-year-old daughter. He told me, “I kind of have this terror scenario: ‘Oh, my God, if there is a civil war or a giant earthquake that cleaves off part of California, we want to be ready.’ ”